Our online service will be uploaded to our Facebook, YouTube, and website
Watch this Week's Service
SUNDAY MORNING BIBLE STUDIES
Adult Bible Study: Sundays @ 9am
Teen Bible Study: Saturdays @ 6pm
​
Click the "Ministries" button below to see other events offered for adults and children
Ministries
WHAT TO EXPECT:

You'll find a casual atmosphere at EPCBC. No dress code here: folks show up in blue jeans and t-shirts or suits and ties. Help yourself to coffee or tea in the foyer and feel free to enjoy our fellowship area. If you have kids, our Sunday morning Children's Ministry has Children's Church available Pre-K through Kindergarten. We have a comfortable cry room for mothers and their babies, as well as a space in our library for parents and toddlers to go during the service if they need to get the wiggles out. The music in the service is uplifting and diverse, and the messages are Bible-based. As a community church, we love connecting with those around us! Go ahead and take a look at our ministries tab to see the fun events, outreaches, and studies we hold. We would love for you to join us!
​
WHAT WE BELIEVE
The word of god
​We believe that the Bible is the Word of God, fully-inspired and without error in the original manuscripts, written under
the inspiration of the Holy Spirit, and that it has supreme authority in all matters of faith and conduct (Matthew 5:18; 2
Timothy 3:16-17; 2 Peter 1:20-21).
the trinity
​We believe there is one living and true God, eternally existing in three Persons (Father, Son, and Holy Spirit). These are
equal in every divine perfection, and that they execute distinct but harmonious offices in the work of creation,
providence and redemption (Genesis 1:1; Deuteronomy 6:4; Matthew 28:19; 2 Corinthians 13:14; Colossians 1:15-17).
God the father
​We believe in God, the Father, an infinite personal being, perfect in holiness, wisdom, power and love (John 4:24;
Romans 11:33-36; 1 Corinthians 8:5-6). We believe that He concerns Himself mercifully in the affairs of all people, that
He hears and answers prayer, and He saves from sin and death all who come to Him through Jesus Christ (Ephesians 2:4-
7; 1 Timothy 2:3-4).
god the son: jesus christ
​We believe Jesus Christ is God&#39;s eternal Son, and He has the same nature, attributes and perfections as God the Father
and God the Holy Spirit (John 1:1-3; Colossians 1:15-17). We believe further that He is fully God and fully man, conceived
by the Holy Spirit and born of the virgin Mary (Matthew 1:23; Luke 1:34-35). We believe in His sinless life, miracles and
teachings. We believe in His substitutionary atoning death, bodily resurrection, ascension into heaven, perpetual
intercession for His people, and personal, visible return to earth (Isaiah 53:4-6; Luke 24:51; Acts 2:23-24; Romans 8:34; 1
Corinthians 15:3-4).
god the holy spirit
​We believe in God the Holy Spirit as the trinitarian agent who has the same nature, attributes, and perfections as God
the Father and the Son. The Spirit draws all mankind to God (1 Cor. 12:3(, comes forth from the Father and Son to
convict the world of sin, righteousness and judgment, and to regenerate, sanctify and empower all who believe in Jesus
Christ (John 16:7-15). We believe that the Holy Spirit indwells every believer in Christ. He is an abiding helper, teacher
and guide (John 14:16-17, 26; Ephesians 1:13-14)
Humanity
We believe God created mankind as male and female, in the image of God, and as image bearers ALL human life is
intrinsically valuable. Humanity was free from sin when originally created (Genesis 2:1-25). We further believe every
human being is a sinner by nature and by choice and is therefore spiritually dead (Psalm 51:5, Eph. 2:1). We also believe
that those who repent of sin and trust Jesus Christ as Savior are regenerated by the Holy Spirit (Acts 3:19-21; Romans
10:9-10; 1 Corinthians 6:9-11). Human life and conduct should adhere to God’s word which is a necessary component for
personal sanctification (2 Timothy 3:16-17, 2 Peter 1:3).
Salvation
​We believe in salvation by grace through faith in Jesus Christ (Ephesians 2:8). We further believe that this salvation is
based upon the sovereign grace of God, and was purchased by Christ on the cross, and is received by mankind through
faith, apart from any human merit, works or ritual (John 10:27-30; Ephesians 1:7-10, 2:8-10; Titus 3:4-7). Salvation results in righteous living, good works and proper social concern for “the least of these” (Ephesians 2:10; James 2:18,
Matthew 25:40).
the church
We believe in the universal church; a living spiritual body of which Christ is the head and all regenerated persons are
members (Ephesians 1:22-23; 1 Corinthians 12:12-13). We believe in the local church, consisting of a company of
believers in Jesus Christ, baptized on a credible profession of faith, and associated for worship, work and fellowship
(Ephesians 4:11-16). We believe that God has laid upon the members of the local church the primary task of giving the
gospel of Jesus Christ to a lost world (Matthew 28:19-20).
the ordinances
We believe that the Lord Jesus Christ has committed two ordinances to the local church: baptism and the Lord&#39;s Supper
(Matthew 28:19; Acts 2:41-42). We believe that immersion is the best expression of believer&#39;s baptism because it best
symbolizes the believer&#39;s identification with the death and resurrection of Christ (Acts 8:36-38; Romans 6:4). We believe
that the Lord&#39;s Supper was instituted by Christ for commemoration of His death (1 Corinthians 11:23-25). We believe
that these two ordinances should be observed and administered until the return of the Lord Jesus Christ (1 Corinthians
11:26).
Last Things
​We believe in the personal and visible return of the Lord Jesus Christ to earth and the final establishment of His kingdom
(Matthew 24:27; 1 Thessalonians 4:16-17). We believe in the resurrection of the body, the final judgment, the eternal
joy of the righteous and the endless suffering of the wicked (Matthew 25:46; 1 Corinthians 15:51-53; Revelation 20:11-
15).
CONTACT EPCBC
​Eagle Point Community Bible Church
27 South Shasta Avenue  |  PO Box 192 Eagle Point, Oregon 97524
Phone: 541-826-2767 | Fax: 541-826-2818
Email: eagle@epcbc.org 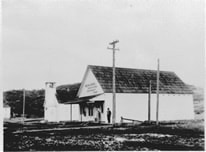 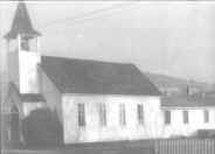 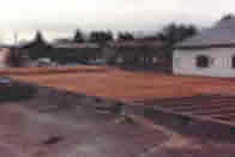 From 1893 to 2021!
In 1893, the Taylor family moved to Eagle Point, Oregon and started a Sunday School in a log house on the banks of Little Butte Creek (first image). In 1906, property was donated and a building erected by the community for the purpose of holding church services. The first congregation was a Baptist group.

​After the Baptists left, a series of ministers filled the pulpit for various terms until 1926 when the church organized as a Presbyterian congregation. Except for a few seasons, the church continued to grow and thrive. Notable pastors during this time included J.S. Smith and Keith Fields. Following Pastor Fields' resignation, the church voted to retire the Presbyterian church and organize as a community Bible church. It was not until 1956, however, that the congregation was officially incorporated as "Eagle Point Community Bible Church." The church continued to grow under the ministry of Floyd Pollack, Glen Wade, and Joseph Munshaw in the late 40's and through the 50's. New building additions and new ministries continued to be added during this time, with the official incorporation coming in 1956. (middle image)

​Warren Christen came to Eagle Point Community Bible in 1960 and stayed through 1978. More growth and remodeling occurred to the building. The church hosted a Christian Kindergarten from 1977 to 1982 (third image).

In 1979, Dick Bull arrived as EPCBC's pastor. We gained an expanded sanctuary, a fellowship hall, and a successful child care center which operated for 17 years, in addition to a strong man of faith. Since then, EPCBC has continued to grow and expand both physically and spiritually! After the ARISE project in 2011 (story down below!), we added our Worship Center, fireside room, and larger office space.

EPCBC continued to operate smoothly, preaching God's word and expanding our ministries. Then, in March of 2020, the coronavirus pandemic took the world by surprise. We closed our physical doors for a short time, but continued to hold services and worship time online. By the grace and incredible plan of God, we established a greater online presence in order to reach more people with His good news. At this same time, we hired full-time youth pastor Norm Welch who came all the way from Nebraska with his family. Moving in the midst of a pandemic was something they never expected, but God works in mysterious ways. We are so grateful to have the Welch family here in Eagle Point!

In January of 2021, Pastor Dick Bull announced his upcoming retirement. God has blessed EPCBC beyond measure with bringing him to the little town of Eagle Point all those years ago. When Dick turns 70 (or somewhere around there) he will be stepping aside for the next man God brings to us.

EPCBC continues to enjoy a reputation where whole families are welcome, with outreach to teens, children, and adults. We know there will be more challenges in the days ahead, but we always move forward in faith and have trust in our great God.
​The ARISE Project

As EPCBC continues to grow, it is important to build for the next generation. That's why we as a congregation are looking to arise: arise to fellowship, arise to worship, arise to serve, and arise to give, even as we build for the future. One of the hallmarks of this was the building of a new Worship Center.
the story
In 2011, the congregation and leadership of the church raised funds to expand the existing foyer to accommodate the increasing number of guests and facilitating their entrance, exit, and time of fellowship.

Interestingly enough, as months went by, the need for an additional exit in the sanctuary was determined. The leaders of the original building committee stepped out in faith and drew up preliminary plans that would not only accommodate the new door, but place it so that one day it would be part of the hallway for yet to be planned office space. In 2014, the new door was added, as well as two new classrooms and a storage area that would be next to a proposed sanctuary.

Plans for a new worship center were set into motion, with an incredible $2 million estimate. It seemed so big and so impossible, that only God could do it. And then, the first miracle came: an anonymous donor offered to match up to $1 million, provided the other gifts and pledges were raised within a year. Fundraising and sacrificial giving happened in the months following. Large donations and "widows' mites" poured in, along with the prayers of the saints.

​Finally, in spring of 2015, on the deadline given for the matching gift, we received contributions and pledges that put us over the $1 million mark! It was a goal so big and so impossible, that only God could do it. And He did!
Months of final plans, paperwork, and permits followed. And then, in spring of 2016, demolition began on the old office wing (originally built in the 1950s). Clearing and grading the lot, preparing the foundation of the existing building for the addition, and the actual start of the building filled the air with the sound of tools and equipment.
Palm Sunday, April 9, 2017 was the last Morning Worship Service in the existing sanctuary. Following the service, the congregation helped bring chairs and equipment into the new Worship Center and pulled up the carpet to prepare for the renovation of the sanctuary.

Easter Sunday, April 16, 2017 was the official debut of the new Worship Center (the Good Friday service was also held there). it was an exciting and historical day of praise and thanksgiving, not only for the dedication of the new area, but also for the resurrection of Jesus Christ. Indeed, ARISE was a project so big and so impossible, only God could do it. And since God did it, only He can get the glory.